Mike Golic and Trey Wingo break down the top news, games and drama throughout the sports world.

Every morning, #1 pick in the NFL Draft, Keyshawn Johnson joins #2 pick in the NBA Draft Jay Williams and Max Kellerman as they set the sports table for the day. From the games that electrified us the night before to the stories that will catch fire during the day, Key, Jay and Max will update, inform and entertain. The sparks will fly as these legends debate what’s happening and grill the best known guests in all of sports. This is the home for hourly podcasts of the national radio show.

Hour 4: Rodgers' Legacy
The guys discuss how insane this weekend was in the NFL, and what we could expect going forward. Also, ESPN Packers Reporter Rob Demovsky joins the show to talk about Aaron Rodgers' legacy, and what could happen with him moving forward. Plus, Monday Night Football Analyst Louis Riddick gets fired up over what he saw in the Divisional Round!
Hour 3: New Giants GM
The react to the Giants hiring new GM Joe Schoen, and discuss where they go from here. Also, Keyshawn's "Key Observations" from a wild weekend in the NFL. Plus, will Tom Brady retire after the season? ESPN NFL Reporter Jeremy Fowler stops by to talk about that, and where some of the NFL's head coaching searches are!
Hour 2: Brady's Future
Is Tom Brady going to retire after this season? ESPN Football Analyst Dan Orlovsky joins to brag about Matt Stafford's incredible performance yesterday. Also, Former Packers RB Ahman Green joins to talk about Aaron Rodgers' future. Plus, should the NFL change their OT rules?
Hour 1: Best Weekend Ever?
Was this the best weekend of football we've ever seen in the NFL? The Chiefs beat the Bills in a crazy OT game. Does the NFL OT rule need to be changed? Did Matt Stafford finally prove how good he can be? Also, the guys go No Huddle on the 4 games from the weekend. Plus, ESPN NFL Analyst Rex Ryan joins the show!
Hour 4: HOF Hour
The guys welcome in Pro Football HOF member Ronnie Lott to preview the Divisional Weekend of the NFL Playoffs before going across the NBA landscape with ESPN NBA Insider Adrian Wojnarowski and more.
Hour 3: Hot Seat in Dallas?
The guys discuss if Mike McCarthy is on the hot seat in Dallas before welcoming in Pro Football HOF member Derrick Brooks and present what is at stake for each team in the Divisional Round of the NFL Playoffs and more.
Hour 2: Four Downs
The guys look closely at the matchup between the Buccaneers and Rams and wonder if Sunday could actually be Tom Brady's last game. They also welcome in ESPN Football Analyst Harry Douglas before going through Four Downs and more.
Hour 1: Goodbye to Legends?
The guys continue to preview the Divisional Round of the NFL playoffs and wonder if we could be seeing the final games of Aaron Rodgers and Tom Brady in their current uniforms. They also talk about Russell Westbrook responding to getting benched before talking with ESPN NFL Insider Dan Graziano and more.
Hour 4: Blame Game
The guys continue to discuss who deserves the blame for the Cowboys coming up short yet again in the postseason. Also, ESPN Daily Wager Contributor Joe Fortenbaugh gets you set for a huge gambling weekend. Plus, Former Titans & Rams head coach Jeff Fisher joins the show!
Hour 3: Ja for MVP?
Who is the front runner for the NBA MVP race right now? What Coach/GM combo should the New York Giants be interested in bringing in? Also, ESPN NFL Analyst Damien Woody tells you who deserves the blame for the Cowboys loss. Plus, Take It or Shake It! 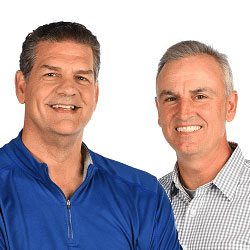